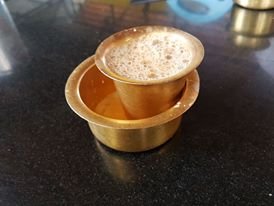 Call it cliché or filmy, popular culture sees Madras a certain way. It’s the Chennai Express or Rajnikanth effect. But, Madras is a lot more than Rajnikanth, Prabhudeva, Idly Dosa or Nariyal Pani. As many people say, I say this too. ‘Chennai is a city, Madras is an emotion.’ But how can I, of all people, say this? I wasn’t born or brought up here, never travelled, nor did I have any friends or relatives in this city. Yet it became home, when I first shifted to Chennai, on a job transfer. I was a small city/small town girl, till I migrated to a Metro for studies and work. Every city was big, fast and fascinating for me. I had been to Mumbai, Delhi for short visits but never for long stays. After Kolkata, Chennai was the second ‘Metro’ City for me. I lived here for few years, left and came back again, to notice the difference and savour it even more.

The most noticeable trait Chennai carries from centuries, is its rooted culture. People value their age old traditions and way of life here, integrating it well with their modern day lives. Religious customs, prayers are integral part of life. It’s not unusual to hear chants early morning or priests visiting homes to perform pujas. People buy vehicles, jewellery on auspicious days and time of the day. Rahu Kaalam or inauspicious hour is avoided to perform any important task. ‘Going to Temple’ is a part of everyday life, you can see youngsters walk into offices, schools, colleges after visiting temple first thing in the morning, as a ritual. Chennai is also called the City of Temples. There are very old temples in the city, maintained well, visited by thousands. Every locality has a few temples, the architecture and design is often intricate, colourful and distinct. There are many well-known temples in Chennai and a visit to each one is a must.

Despite the invasion of big brands, malls, fashion houses Chennai retains its love for traditional attire. Women, from homemakers to CEOs to artists, adorn the Saree with grace. Saree is not a ‘festival only’ attire here, but a regular formal attire in offices, workspaces, markets and everywhere. Men are often seen in vesti at home and girls in their paavdais.

You will find beautiful kolam or rangoli designs prepared with rice powder outside huge bungalows and huts, alike. During Pongal festival, large, colourful designs depicting the harvest festivals can be seen outside every house, apartment and door all over the city.

This part of India hold onto its traditional cuisine with pride. Cornflakes, muesli, pizza and burgers have not invaded home kitchens. Rasam, sambar, Idly, poriyals, chutneys, uthapams and many dishes are prepared and eaten, the traditional way. There are several food chains in Tamil Nadu that offer South Indian food, often at reasonable price, compared to other cities. Nothing fancy, but food prepared and served with utmost hygiene and authentic taste. Most of the meals are wrapped up with the iconic filter coffee, served in a small steel glass and saucer set. No porcelain or china will do, when it comes to filter coffee. Go to a South Indian home or a five star, this special fare is served this way only.

The Beach: Chennai loves its beaches and general public from all walks of life throngs the city’s beaches, especially Marina Beach, with a long coastline. Fried fish and deep fried potato fritters are the favourite snacks sold by vendors. Lack of parks and open spaces is compensated by the sea breeze within city’s limits.

Shopping: Chennai loves shopping and when I say shopping, I do not mean the glitzy malls or supermarkets. Chennai has had a very old fascination with shopping for household stuff, clothes and jewellery. The T Nagar market in the heart of the city bears testimony to love for shopping in this city. A small area with several large and small multi storey showrooms are the mecca for Silk Sarees and Gold Jewellery. Hundreds of people jostle for space in this crowded market and gold sells like potatoes. Gold has been the traditional currency for parking savings and investments. Probably Tamil Nadu is the only state in India where women still go out wearing heavy gold jewellery without any fear. Unthinkable in any other city. If Bombay has Dalal Street, Chennai has T Nagar!

Madras Music Season: Come November and Chennai immerses itself into Carnatic music with the Annual Music Festival held through mid November till January. Various sabhas (organisations) present Carnatic Music performances across the city, attended by music connoisseurs of all ages. Accomplishes artists as well as young talent perform to full house, all through the day. Many NRIs too attend the Music Season while visiting the city.

Thirteen years ago, when I was a corporate bee (slave, should I say) my preferred mode of transport was pubic transport. Ola and Uber were non-existent weird names and auto rickshaws ruled the streets. And the autowallas. Many hit movies used to depict the hero as a rebellious auto driver, with panache! Real life auto drivers never disappointed and always came up to the expectations. ‘No Tamil,’ the moment you uttered these words and you were in for a ride. Literally. They’d quote imaginary fares pretending they didn’t understand a word of English. Hindi was definitely an alien language. Getting near a reasonable fare was a daily battle and then the roller coaster ride. The auto would fly amidst crazy traffic and cut across cars, two wheelers, trucks, from any side. To take a turn the foot would be flung outside with élan, as an indicator. With Ola and Uber, the number of auto rickshaws on the roads have come down but the roads are as chaotic.

Movies, oh yes, the movies! Movies are big business in Tamil Nadu and Chennai is the industry hub. The passion that rest of India shares for cricket, is the passion that this state displays for its movies. No wonder that the biggest political figures here, have been movie stars. I had a glimpse of the Movie Mania once when our entire bank branch staff decided to watch a new Tamil movie after the annual bank closing. The moment the popular hero started to shake his leg to a popular number, people, including women, got up from their seats and started dancing, whistling, cheering. Some threw coins towards the screen. Our office boy and the boss, both were equally ecstatic in their love for the movie. This industry produces some great scripts with original plotlines, melodious music and action that Bollywood is often found copying! And of course Chennai has Rajnikanth!

On a serious note, Chennai is one of the safest Metro cities in India. If you ever return home from a late night movie or work, be sure to find a police van on duty, on roads and street corners. Chennai police and administration do their job diligently. Though there have been few incidents, yet Chennai roads are lot safer for women to walk alone.

A lot has changed here over the years. A decade back, Chennai had just one or two cinema theatres with Hindi movie shows. North Indian food was hardly available. Nowhere in the city could you get a regular Aloo Paratha. Hindi was hardly understood or spoken. Now a person from North, or any other state for that matter, is spoilt for choice, when it comes to food. Every theatre shows Hindi movies, Hindi language and festivals from other states are celebrated widely. With a thriving IT, Services and Automobile Industry, Chennai is a wonderful cosmopolitan city with its heart firmly rooted in its history and culture. Wonderful combination, isn’t it?