I wonder sometimes, how did we grow up without much television, internet, phones or any connectivity. We had limited supply of books, toys or play gear. There were no classes or swimming pools, clubs or recreational facilities. How did we spend our time?

We played our no-frills, no-gear, no-equipment outdoor games. Do you remember any? I remember a few.

The earliest game that I learnt at school was with pebbles, also called ‘Gitte’ in Hindi.

Collect a few round, smooth, easy to toss pebbles. Toss one in the air and as it falls down, catch it and slip another under a finger bridge. It required some practice and dexterity of fingers. Next level, one had to juggle with two, toss one in air, quickly grab another in hand in the meantime and toss the falling one under the finger bridge. It was loads of fun and we played this in school in study breaks. Each group of friends had their own set of beautiful pebbles.

This was a simple game using a long thread or wool yarn, with two ends tied. The loop was then held between fingers of both hands, and moving the thread across fingers like a loom, we created different shapes like a star, a curtain, a diamond. It was an easy fun game that could be played anywhere. Mostly on the rides back home in school bus, we kept our impatient fingers and curious minds busy. Remember the pretty green and blue glass marbles that children carried in their pockets all around for a quick game on earthen ground? It was exciting because the winner got to keep marbles from each game’s win. The game is still played in rural India.

Gilli Dabda was the Indian version of baseball, where you toss a small piece of wood known as gilli in air and hit it with a thick wooden piece of log, with force enough to make a wide trajectory. The one who could toss it the farthest was the winner. Now to toss the small wooden piece in air, it had to be aerodynamically shaped, hence it was given an elongated shape with both ends peeled and cut into a conical points. This made the gilli sharp with enough momentum to go far when struck. But there was a caveat. At times the flying missile landed and hit someone or the player would miss the target and the sharp end landed straight onto the player risking an injury, especially to the eye. There were many accidents, parents forbade children and the game wasn’t allowed in the schools. One can still find the gilli flying in rural areas in vast open spaces, with no fear of injuring anyone.

The simplest of games, pakadam pakdai was catch anyone from the group of runners and chupan chupai was our version of hide and seek. Both involved good running around for a while.

Another variant of catch was Langdi Taang where one had to jump on one leg and catch people within a circle. Good practice of the Balance pose in yoga. 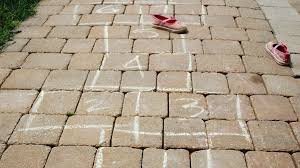 During my school days, walking across a park, playground, pavement or courtyard, one could not miss rectangular boxes drawn with chalk and numbers marked inside them. The most popular game, Hop Scotch, called stapu in Hindi, involved jumping into the boxes without stepping on the line or falling. What better way to get some quick jumping jacks and exercise done? Hop Scotch is popular even today, though playing it on a slippery tiled floor with taped markings is no fun.

As we grew up and got bored of Hop Scotch, we switched to four corners and gallery that could accommodate more number of players and lot more vigorous and competitive. With rectangular sections and pathways drawn between square spaces, players had to mark their territory and not allow the other team to pass through the passages. The game was super exciting and we spent good hours of our free periods in sun, running across the large territory marked in soil. 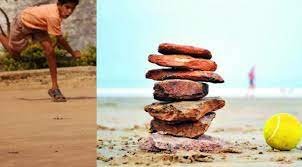 Pitthu was another game very popular with adolescents. The game required stacking seven stones on top of each other to make a small tower and one team’s player aiming at it with a ball and hitting and toppling the stack. The other team would prevent players from putting the stack back together by hitting them with a ball. I have seen many grown-ups too joining in these games in the evening with kids. Kite flying was the most addictive of all outdoor activities. I spent my summer vacations at my grandparent’s place in a small town. The unforgiving sun blazed all day through the open courtyard and evenings brought an oasis of soothing breeze and calm skies. We hopped up the open terrace and observed the whole world across the horizon, relaxing on the roof top, throwing buckets of water on the burning concrete to cool it down. The kite flyers would then appear with their rolls of manja and huge paper kites. As the sun went down, the kites would slowly rise up, dotting the sky with yellow, reds and blues like little birds tethered to a delicate thread.

I wondered how the dexterous kite flyers could send a small piece of paper and string so high? The roof tops were small so many would hop onto neighbour’s. Cutting off another kite would result into a mad scramble to run and seize the prized catch. The younger members of the gang were trained in this, but the competitive spirit often ended in kite runners falling off terrace edges, stairs and many avoidable accidents. One would often come across a news article about a bitter street fight erupting over kite-games and turning into a whole riot with police intervening and arresting the frenzied gamers. Kho kho requires an extremely high athletic ability and spur of the moment thinking. It’s the best form of exercise if one is upto it, without the need for any equipment or large playground. It’s sad that children hardly play these games anymore. Kho kho was part of sports in many schools in the 80s and 90s and girls were adept at mastering the high energy play.

Kabaddi for us was more of a laugh riot than a sport. Toppling over one another, pushing people to ground, dragging your opponents and literally rolling in mud and dust. It calmed all the pent up energy and we ended up all laughing and frolicking on the ground. Animal floor exercises, the new fad? Kabaddi is the answer. Dog and the bone, Posham Pa, Chor Police, Chain, Rope skipping, blindfold, Spinning the top, so many games I remember playing with friends in my early years. Many of these simple and free play games have vanished from our school playgrounds and evening playtime. Sending children to more serious and professional sports coaching is the norm these days.

The simple outdoor games were perfect for free exercise, getting some sunlight, playing as a team, learning to win some, lose some and without seeking an adult’s help for coaching or ferrying us to any ‘classes’.