This is post no. 22  for Blogchatter A2Z Writing Festival all of April. My blogging theme is The 80’s Child where I am reminiscing growing up in the 80’s India. You can read all the posts here

I recently came across a video where a group of people were listening to a live singer singing old ad jingles in a restaurant. It was heart warming and reminded me of the era where ad jingles lingered in audience’s memory more than the product itself.

Many advertisements attained cult status and raised the brand value and market share to new heights through the visibility by the advertisement. It is surprising that even after several years, one can recognise the tune and the words as it is, by just a hint of the music.

The most memorable ads from the 80s that I remember: Lifebuoy positioned its square red bar of soap with germ killing abilities, thus ensuring tandurusti or health. The ads featured a model playing football and equating the energy and health on field with the soap he used before and after the game. It’s a different story that most Indian households never used Lifebuoy for bathing, but for washing hands. Lifebuoy as a brand has lived over the years and still promises protection against germs in it’s different versions – soap bar, liquid and sanitiser. The catchy jingle showed an old man remembering his childhood days when he used to play a prank in the dark and always got caught when a bright Bajaj bulb lighted up the room. He goes on to say that now he is old and still uses Bajaj bulbs to light up his entire house. The commercial was hugely successful due to its slice of life feel. I remember the jingle verbatim even today. In 1970s Dr Karsanbhai Patel from Gujrat started selling a yellow detergent powder at one fourth the price of market leader Surf. The product became popular in his hometown and soon he started selling it all over the country. The detergent was named Nirma after his daughter and the packet had her picture on it. In the 80s, Nirma created a TV ad with a catchy jingle. The jingle and the Nirma girl printed on the packet became synonymous with safedi though the actual USP of the product was its low price. The lemony yellow green bar of soap sold by Hindustan Lever Limited gained huge popularity in the 80s with it’s beautiful ad commercial featuring model Karen Lunel splashing in a waterfall in green bikini and the iconic jingle playing in the background. The ad was created by ad Guru Alyque Padamsee and Lintas team. The young carefree girl enjoying her bath came to be symbolic of freedom from everyday life while one spends a few minutes under the shower, the ad was a hit. Years later, Priety Zinta featured in the same ad and the jingle. The shiny yellow pack the product and it’s fragrance instantly reminded one of the ad and the waterfall. We all tried splashing water and wet hair in the bath just like the Liril girl, didn’t we? Manufactured by an Indian company, Vicco Turmeric launched a TV ad in the 80s featuring Sangeeta Bijlani as a young bride. The brand associated goodness of Indian skincare methods i.e. haldi with an Indian wedding scene. A shy yet modern girl getting married and her skincare routine taken care of by Vicco Turmeric cream and it’s ayurvedic properties lending a beautiful glow to the just married girl. The ad, the brand Vicco and the model all went on to be highly visible through the campaign. Vicco still plays the same jingle and it’s packaging has remained the same over the years. 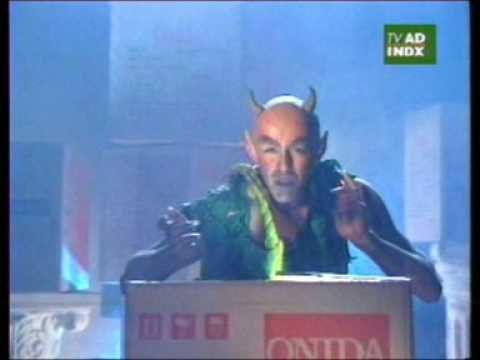 The devil with green horns and long fingernails breaking a TV screen broke the mould of conventional advertising on Indian screen. Without talking about the product’s technical features that competitors did, Onida’s Devil campaign shocked the viewers and worked well for the brand. Combined with a slick design of the TV set, the ad pushed the brand ahead in it’s market share and brand recall. The ad tagline ‘Neighbour’s envy, Owner’s pride’ appealed to the Indian consumer’s social aspiration, to be ahead of others in perceived status.

Manufactured by an Ahmedabad based company, Rasna the soft drink concentrate made a mark in the market crowded with carbonated drinks like Coca Cola, Thums Up, Limca and Gold Spot. Rasna positioned itself as a tasty drink for children. The advertisement campaign launched in 80s with child model Ankita Zaveri struck chord with its sunny orange hues, the little girl planning her birthday party and celebrating with her friends sipping Rasna. ‘I Love You Rasna’ at the end, the simple tag line made the brand a favourite summer drink in Indian households.

I remember attending many birthday parties where Rasna was served with snacks. The company came out with small, low priced sachets and packs, easier on the common man’s pocket and eleven flavours to choose from. It was fun to open a new flavour and compare. My favourite was orange, the bright sun kissed colour and flavour they showed in their ads. This made in India brand has retained its leadership over the years despite many products and foreign brands entering the category. After remaining a market leader in the scooters category for years, Hamara Bajaj, was an iconic advertisement launched in the early 90s by Bajaj to combat the onslaught of stylish motorbikes and Kinetic scooters. Created by Alyque Padamsee, Hamara Bajaj went beyond just scooters and the jingle represented the new India’s aspiration.

Advertising has come a long way with new trends, new mediums and social media. It’s a complex world with a lot of noise. Catching the viewer’s micro attention span in a few seconds is every marketer’s challenge, yet we hum the old ad jingles without missing a word even after decades. Says something?